A couple of months ago, I had the chance to spend some days in Europe's youngest country: Kosovo. Depending on whom you ask, of course, it is or isn't a sovereign state. But since Germany recognizes it as independent state, I will treat it as such. It's complicated.

Unfortunately, I did not have as much time to travel the country as I would have liked, but I was keen to learn about local food and drinks, among a million other things (another blog post might follow). Also, as it happens so often, I caught a cold on my first day of travelling. Therefore I could not dive into as many activities as I had planned to.

Nevertheless, upon arriving in Pristina, Kosovo's capital, I was craving good food - and good beer. For I had searched the Internets before I left and I knew there was lots to discover. I even found the website of a craft brewery, yet was unsure how easy it would be to find their beer. 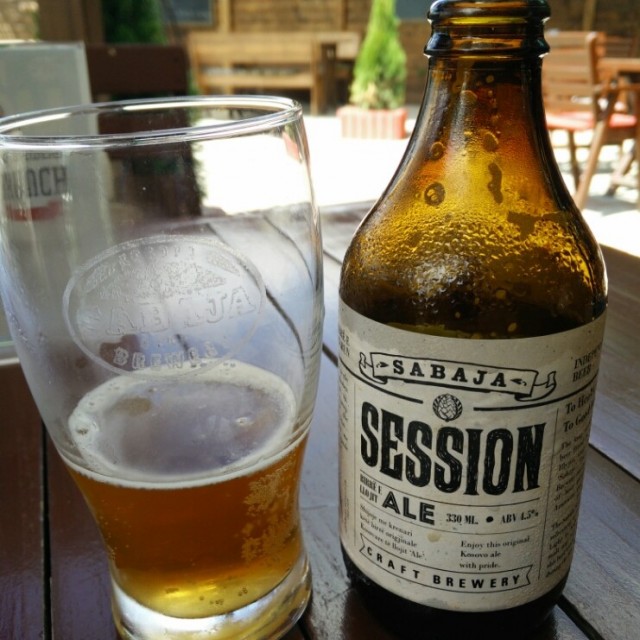 As it turned out, it's all over Pristina! It seems to be especially popular among young people (there are lots) and students. Since 2012, the Sabaja Craft Brewery produces a small range of beers in the vicinity of Kosovo's captital, Pristina. It's served in many pubs, and the brewery even has a small outdoor venue next to Pristina's City Stadium.

I tried their Session Pale Ale as well as their Sabaja IPA, and both taste really great. Their third regular type of beer is called Harry's Porter - kind of cheesy, yeah, but I really like this type of beer. In addition, they brew various seasonal beers, e.g. a Stout called Winter King in the cold season.

Of course, there is more beer produced in Kosovo. The Peja Pilsner by Birra Peja makes for a decent drink, but is by no means exceptional. Even worse is - to my palate - the Birra Prishtina; pretty watery and tasteless.

Then there is beer from the neighbouring countries like the omnipresent Skopsko by Pivara Skopje from Macedonia (which has been bought by Heineken) or Laško from Slovenia.

Kosovo is especially proud of their wines, especially from the Orahovac region. But now there is also beer they can be proud of.